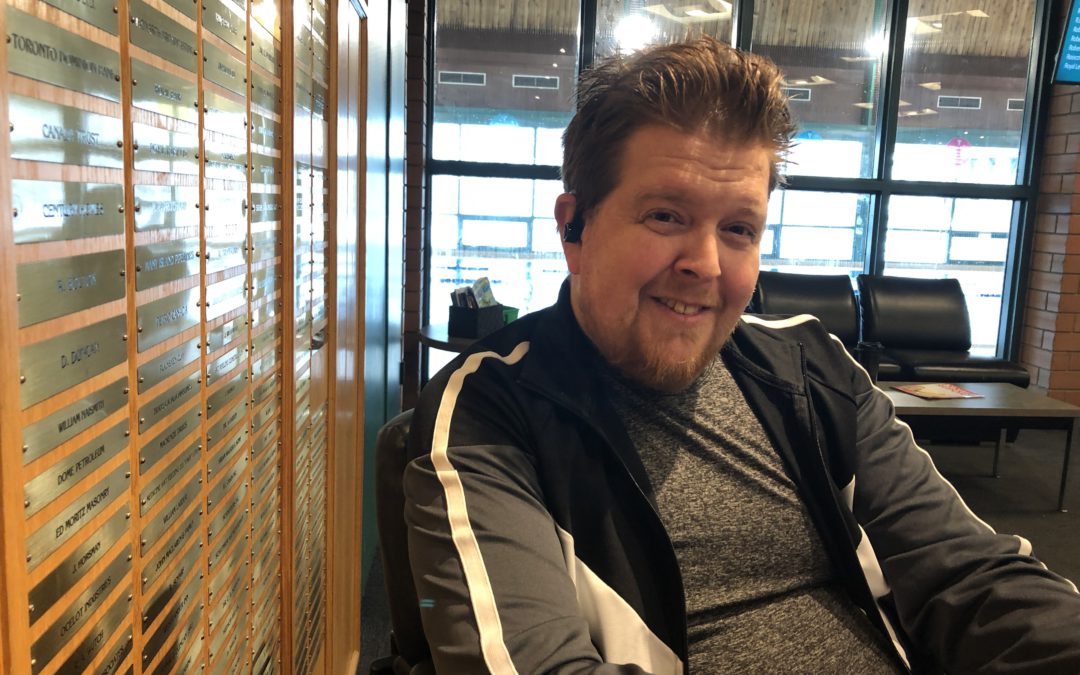 Hi there and welcome to another article about what’s happening here in Medicine Hat. I am having a lot of fun meeting with people and sharing my experiences. I got the chance recently to talk with Jeremy Silver, the current Chairman of the CCDA and possibly the future Mayor of Medicine Hat. I say that because I know Jeremy has goals. And being the Mayor, is one of them.

I have known Jeremy for a few years now. Most people in town know him as the really busy guy behind the counter at the iFix Phones shop in Downtown Medicine Hat. He is the guy with the earpiece that seems to be handling 3 or 4 different things all at the same time. His ability to scope out his sorroundings and at least look like he knows what’s going on, impresses me!

Everything I know about Jeremy boils down to he is a pretty committed guy. From what he tells me, he built iFix Phones from his kitchen table while he was driving a tour bus. Jeremy got really big really fast because of the demand of his services as technology and smart phones began to kind of take over.

Jeremy looks for the bright side in situations, one reason I think he would be a good Mayor. iFix Phones is feeling the pressure just like everybody else is. My recent story about the Yellow Vest Movement, it’s not going anywhere. It is indeed growing and Jeremy knows why. The oilfield workers that kept him so busy with their broken screens aren’t walking through the door right now.

That doesn’t matter to Jeremy though. He has hopes just like all of us that things are going to bounce back. Another thing I really admire about Jeremy is his spirit. Despite going through some tough times, he really is fighting the good fight. When I get to sit down with him I meet him at the YMCA. He looks good, cheerful. Ready to answer all the questions I am wondering about.

I tell him he looks good and he thanks me. I am reminded of his weight challenge and I commend him for it too. He is working on bettering himself and has lost a lot of weight. Jeremy sets a lot of good examples in the community. I also learned that he has been making the Spirit of Christmas Feast happen for the last 6 years in Medicine Hat.

It’s funded by the United Way but Jeremy is the one making it all happen and to me, that really is just cool. I admit it, when it comes to Christmas and you see people donating the most precious thing of all, their time and good will, well there is no higher accolade.

So here I am talking again with one of the many Entrepreneurs here in our city like Kevin Ferguson or Troy Teierle, making things happen and I am most curious about why Jeremy is in the news about budgets or something.

Despite the politics I mention here and there about the west and it’s struggles, I don’t want to be a really outspoken political guy. I just want to inform people and share, educate. I am not interviewing anybody at city hall, I really don’t think I am that important or they care to talk to me. And I am good with that.

The thing is though, Jeremy is a good guy and I hear him speaking up and that makes me want to hear him out. Sometimes just so I can have a good debate with him!

Here is what I find out about what is in the news about Jeremy and the CCDA. Basically, Jeremy says him and his incredible team are making positive changes and he wants the public to know what the right information is.

Jeremy believes in transparency and the greater good. One of the reasons he says he even wanted to take the job at the CCDA. In order to be the Mayor, Jeremy says he needs all the experience he can get. He wants to earn respect and build trust with all the people here in town.

He explains to me that without all the tremendous support he does get from his team, nothing would be happening there to begin with. Jeremy knows things are tight and wants everybody to know they offered to take a budget cut already.

The CCDA, according to Jeremy, saves the City of Medicine Hat money. Which, is probably at the very top of the list for everybody concerned right now. Second on the list, is improving downtown and bringing back life to all the businesses. Taking care of routine maintenance, something that would indeed cost more money if the CCDA wasn’t handling it, is kind of killing those two birds with one stone.

It is really easy for people to find things to be angry about. Lots of things going on and obviously we as citizens just want to make sure that common sense is taking over again when it comes to our money and…our politics.

Jeremy says him and his team are working very hard and he tells me is very fortunate to have these dedicated people looking for all the solutions that city hall is looking for. The city and it’s elected officials have their own duties to take care of as well and Jeremy says he know that.

They ( city officials ) were elected to do a job; they are there to make sure the city’s money is safe. Everybody is glad they are doing that for sure. We just want to make sure that we don’t get lost in the wrong answers before we all understand how everything works.

I wanted to write this article about Jeremy and offer my support to him. He is not a confrontational person and he definitely isn’t the type to go looking for a fight. Just the exact opposite. This is one of the reasons I think he would actually make a great Mayor.

This is also why I wanted to ask him how he feels about the news and what people are talking about. I am glad I got to ask him and share it here with you. The bottom line, Jeremy believes he and his team are doing exactly what they are there to do and it supports Medicine Hat. He is also ready to answer questions, for anybody.

Since writing the article, the City council has decided to vote down any more budget cuts for the CCDA. It is good to know Jeremy and his Team’s good work can continue.