Let the Sonshine In! 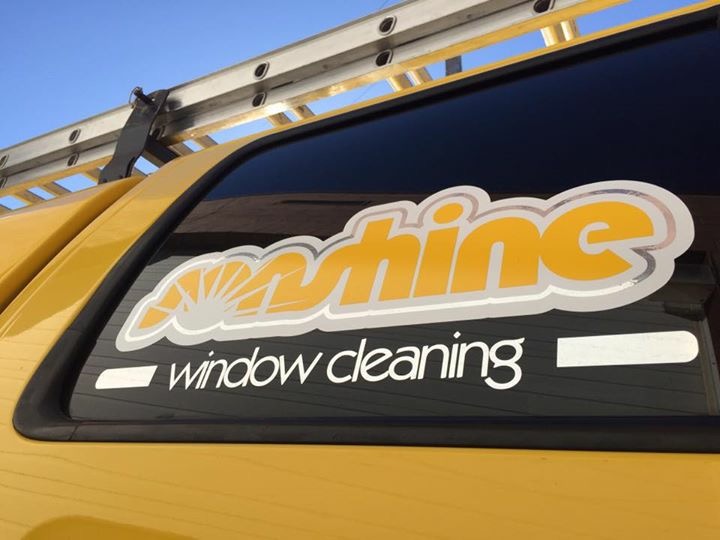 Recently I got the chance to sit down with Kevin Ferguson, someone I pretty much feel is family. If you have met Kevin, I think you can understand what I mean. We met up at the Husky on the highway where you can still get a great breakfast with coffee, including a decent tip for $10.  Kevin got there before me but it didn’t take long for the waitress to show up at the table to pour me a cup of Java. I think she could see the excitement of a couple of close buddies meeting up to talk.

Kevin owns Sonshine Window Cleaning Corp. and he has been in business for over 15 years now. I don’t think there is any secret to why Kevin does so well here in the Gas City.

Meeting Kevin can change your day. He believes in the Lord and he is not embarrased or ashamed to admit it. He also has love and kindness for anybody that crosses his path in life. There is no denying the energy you feel in Kevin’s presence.

When I met Kevin, my wife was near the end of her battle with cancer. Something that I never want to relate to with anyone…the words always escape me.

Kevin and I got together to build his website but I know that his presence in my life was, and still is something beyond understanding for anybody else that knows us. His attitude and sheer will to live everyday to the fullest with his kids is nothing short of extraordinary.

He is a humble man who believes there is beauty in everything in life. While maintaining Sonshine Window Cleaning Corp. Kevin raises the 3 kids he had while his own wife battled cancer years ago.

Where the words escape me, Kevin has wisdom, from unfortunate experience for a lack of any other way of saying it.

Kevin, in my eyes is bold, and real, and a true inspiration especially if you can relate. He let me know that things were ok and that I am allowed to feel how I feel. More importantly he helped me to understand that I am the only one who can deal with the feelings inside, something he says the Lord helps him with every day.

I am not here to really discuss religion, especially in today’s world, I don’t believe there is a right or wrong when it comes to ones faith. How can there possibly be? What I can say is that I believe in the power of positive energy and thoughts. That is what I call prayer. And what Kevin and I can agree on is that when you have the will power to put your faith in God or the power of the Universe, good things happen.

Another reason that I have so much respect for Kevin, he is not there to force his believes on you at all, but you can feel that love if you need support from Kevin. He wants you to feel the joy and happiness that he experiences, knowing God and taking care of his family and running Sonshine.

Thanks to a very capable and hard working management team, Kevin makes the time for his kid’s. And it sincerely impresses me how he makes his family his priority. Usually when I think Kevin is working, he is at a tournament, or taking his kids camping or fishing, you name it, Kevin is a family man first.

In getting to know Kevin, I got to find out the incredible story of faith that is the history of Sonshine Window Cleaning Corp. I can’t imagine the stress and anxieties that would come along with the problems Kevin was facing. It’s a very heart warming story of tragedy and triumph. A true example of fortitude and work ethic.

Kevin tells the story of riding his bike through the neighbourhood. He was worrying about how he was going to pay his bills. His wife was diagnosed with cancer and there was a baby on the way. They had a family and they were trying to survive.

No insurances, nobody to turn to. Not a lot of hope.

Peddling through the city Kevin stops at the top of a hill to take a break and contemplate his future. Looking out over all the houses, the bright yellow star shining over all the green grass, God spoke to Kevin, telling him he could wash windows.

Kevin just pictured endless opportunities! After all every house had windows! And lot’s of them!!

Instead of giving up hope Kevin grabbed a bucket and squigee and started washing windows. And he didn’t stop.

You can see his trucks, you can’t miss his trucks!! You will see the beautiful bright yellow Sonshine Window Cleaning Corp truck and trailer driving all over Medicine Hat and sorrounding areas cleaning.

I have lived here long enough to know there people are willing to pay for quality service because they believe that you get what you pay for in life.

Kevin takes pride in everything Sonshine does and he believes that he charges a rate that is worthy of the job done.

Sonshine was built by using a 7 step process for cleaning a window. While that may sound a little silly for washing windows, Kevin would disagree with you.

He can explain every step taken when Sonshine cleans a window.

Kevin has built his company on a genuine work ethic and a sincere business ethic. Sonshine has a reputation with their loyal customers for not only maintaining a high standard of cleaning, but taking care of all the little details as well.

I can bare witness. Kevin has sent his crews to wash my windows, clean my ceiling fans and clear my snow. Each time, they were polite, clean and tidy. More then that they were professional with a friendly attitude. I felt like they wanted to be there and they just wouldn’t stop telling me, no problem, everytime I said something might be in the way or I wasn’t  quite ready for them.

Recently having my house cleaned from top to bottom, I had the pleasure of meeting one of Kevin’s crew. The young lady that showed up at my house ready to do battle! Don’t get me wrong, it wasn’t quite a disaster but I wanted help in getting everything nice and fresh, a task I felt overwhelmed with. Sonshine Window Cleaning Corp. was a no brainer to make it quick and easy.

All of these different things are part of what makes this city tick and Kevin and Sonshine are a shining example of living the good life. I really mean that too.

Knowing Kevin has made a great difference in my life. When I have needed him, he has been a brother to me. When we have had troubles with his website or technical issues, he always says, we are family first, brother.

And then they still show up to give the best services they can.

Being able to sit down and talk to Kevin is a wonderful experience because there is substance in everything he wants to share.

To end our breakfast at the Husky, I ask Kevin one more question.

Kevin, what do you want the people of Medicine Hat to know about Sonshine Window Cleaning Corp?

Yes, really, that is my last question for you today, I have my pen ready to take more notes but Kevin smiles and says he has to get back to me on that one.

It can’t be answered in a sentence or two. Not for Kevin to express his love for this city and the people who have helped him build Sonshine Window Cleaning Corp.

The problem is, Kevin is a pretty busy guy and asking him what he whats to tell Medicine Hat about his company is not easy for him to do.

He has too much love. Kevin is the type of guy that just wants to know what the problem is, if there is one, cause he can help solve it. If there isn’t a problem, even better! Kevin says there is a life to live and he is really busy just doing that.

Let me tell you, there are no short cuts. There is no attitude. The crew doesn’t act like they want to be somewhere else. The fact of the matter when it comes to Sonshine Window Cleaning Corp is they treat you like family.

Kevin has a website, sonshineclean.ca where you can find out more about all the services Sonshine Window Washing Corp has to offer.

If you haven’t Let the Sonshine In…give these guys a call, they will indeed make your day Shine a little brighter with Sonshine!

Got a question for Kevin? Got a comment? Let’s hear it!!

Thanks for Reading What’s Happening in the Hat!