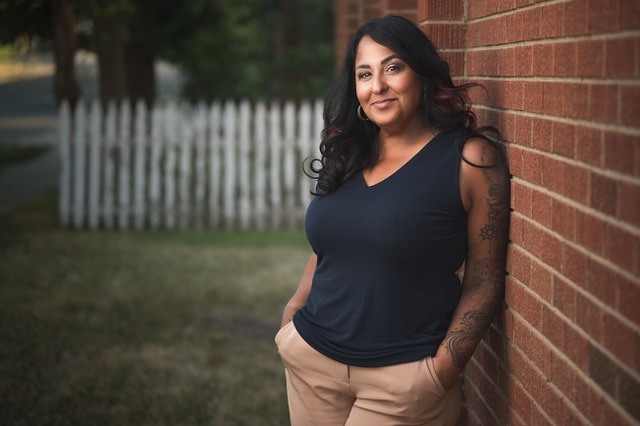 I had a lot of fun right from the start with Shila. She is a force to be reckoned with and there is no doubt she is proud of this fact. She owns it. I think Shila can almost be intimidating to some people, even I was taken back a little with Shila’s powerful presence, but this is definitely a strength. Her confidence comes from trusting her gut and following her instints.

She calls it adulting and I call it a well informed thoughtful process to make the decision to run for Councilor. You can tell from her answers that she is not a one trick pony that is taking this lightly.

Taking a decade to decide if you are ready to enter politics is a long time. It says you are serious and it definitly demonstrates that you want to serve the people to weigh the pros and cons for such a long time.

I really liked Shila’s answer about this. It was mature, intelligent and mixed with common sense. Self evaluation is a difficult thing especially if you have to admit weakness. Shila saying that she needed more Pro’s then Con’s in her personal life even more then the idea itself, spoke volumes to me.

Like Jim Turner, Shila impressed me with more facts about business and how politics really works. She is a successful business owner like other candidates, she has a vested interest in making downtown Medicine Hat a busy place.

She pointed out some of the little things, the trivial things that can add up to causing a lot problems. Something as simple as parking.

Downtown is full of service orientated business with a mix or retail shopping and local restaurants. This means that sometimes people need a few more minutes. I am not saying there should be free parking cause I don’t think that will happen no matter how much I think it should. But if you are afraid of parking or getting a ticket cause your appointment is 2.5 hours, well it changes how you feel about sticking around and shopping or eating.

Great questions and great perspectives from Shila, pointing out these issues, goes along with the complaint of red tape downtown, and in the city. How we police, Shila is quick to point the excellent job The MHPS has done in handling downtown. We can still look at how we create policy, by-laws and laws. Who’s best interest are some of these regulations and do they encourage growth?

Shila owns a Human Resources Employment Agency. She understands people and she believes there are ways to deal with all the issues facing downtown, including the people.

I am guilty of not knowing how to handle this issue. The easiest way I describe it is Mental Health. Thank goodness the issue in itself has come to light for all the right and wrongs reasons with Covid. Mental Health and depression has a spotlight on itself and for good reasons.

There is an element in Downtown Medicine Hat that needs help. Whether unemployment or addictions is leading the way, the people of Medicine Hat don’t enjoy visiting as much because of this element.

Again, I love the fact Shila has an attitude to take the issue head on, she says we have to start talking to these people, one way or the other.

She agrees that some laws and mandates might help, but they don’t solve the problem. Medicine Hat can be proud of the fact that this issue is world wide and while I don’t believe it is completely true, we should continue to be the compassionate innovators leading the way in helping people help themselves.

High Energy, Shoot from the hip and take no prisoners. Get it done.

Shila had no problem acknowledging all the issues, including talking a little bit about the CCDA. I think what happened Downtown with the Agency is one of many reasons Shila found more pro’s then con’s in running. Some of these issues effected her business and the city in general and she proved there was dissent and it was time for change.

Shila covered all the importants reasons she is putting her name in the Hat for Hatters to vote. ( Forgive me for that one I could not resist. )

When it comes to talking about some of the things that need to change she had no problem calling out where she believes we need more transparency and accountability.

Whether you want to call it the good ole boys or say it’s who you know in the City of Medicine Hat, Shila has no problem saying she believes there needs to be some answers.

This stuff has to make sense to the people and the right people for the job needs to be the priority. Obviously this ties into how policy and infrastructure is created within City Hall.

Invest Medicine Hat, Riverside Project, Aurora to just name a few are the issues that Hatters want to find answers for. There are many Candidates who have different ideas on how to bring these issues to the forefront and deal them.

Some are running ads, some are posting to social media and asking everybody’s story. Some of the subjects are very contraversial and there is a right way to approach them, and a wrong way to approach them. I am not here to say what is right or wrong, the voters will decide that.

Shila is ready to talk about them, she has ideas and thoughts about all of them too.
There are some things that the City of Medicine Hat needs to deal wtih, so Shila wants to talk about them with you, see what makes sense and what doesn’t.

I think what I liked the most about meeting with Shila is she demonstrated the fact that she is passionate about her cause and why she is running. She admits the fact that she is loud and sometimes she has to remind herself to be professional. And along with that fact comes the same fact that Shila is Genuine. True to herself, her values and the people she wants to represent.

You aren’t going to get some sugar coated answer and she is not going to try and tell you she agrees with you, if she doesn’t.

If you are insecure, or not adult enough to have that kind of conversation with Shila, then she understands and respects you but she also has better things to do.

That may sound harsh, but it speaks of confidence, experience and compassionate all at the same. Again, doesn’t matter if you agree, the voters will decide. And Shila knows this. She is proud of it.

Like I said before, I enjoy the stories of success where somebody just felt there was a better way. I admired her energy levels and her presense. I got all of Shila’s attention from the moment I arrived.

Beautiful office, nice stylish ride outback. There is no doubt in my mind that Shila understands the business world and works very hard for all that she has accomplished. You don’t get that kind of confidence without fighting hard and working for everything you got.

Social Media for connections and networking. Shila and I met on Social Media in debates here and there and saying we disagree could be an understatement.

Didn’t matter, we sat down like adults and instant friends and talked. She has adulting seemingly under control where as I admit, I don’t want the responsibility…or to conform to those kind of things right now.

I only mention social media because it binds us all together. And Shila is more then open to talking about anything with anybody, especially what’s important to Hatter’s.

I am not a Harry Potter fan, but I think Shila is wrong when she says that might lose votes, I actually think you might gain some now Shila.

Travelling to see Family. At the end of the day that’s what’s important. That’s why she works so hard so she can live life by her terms. I think we all want a little piece of that.

I don’t know if Shila will win in October.

I think she is a contender and although it is still early I think Shila is doing all the right things. She is open to discussion with anybody and she has the experience with the City, with the people of Medicine Hat.

I think her agressive nature is needed here. I think the people want some attitude on board. I think times are changing a little bit.

I think we want our politicians to be, well, more like us. More like the people that get up everyday and work hard.

The people want change in Medicine Hat…and elsewhere. There are also, a lot of people that think like Shila.

Shila Sharps could be that change. Check out https://www.votesharps.ca/ for more.